Visiting Hearst Castle made me wonder who wouldn’t want to have 2000 year old ancient Egyptian relics in his or her backyard. Ridiculousness.

The place was very impressive as it was built in the shape of some Spanish cathedral from the 15th century and had an enormous collection of incredibly expensive art (like church gates or tapestry from 12th century and such) that one would never imagine in a private house. However, with all this splendor, the word “gaudy” came to mind and my impression was concurred when my friend actually said it out loud.

I kept thinking about the book Fountainhead by Ayn Rand which was written around the same time this house was completed. The book criticizes architectural styles that lump old styles such as the Baroque or Rococo into modern structures to assign grandeur to them where in fact those end up looking pretentious and ridiculous.
I was then not surprised to find out (thanks to google) that one of the characters in the book (the bad one), a tabloid media mogul, was based on William Hearst. 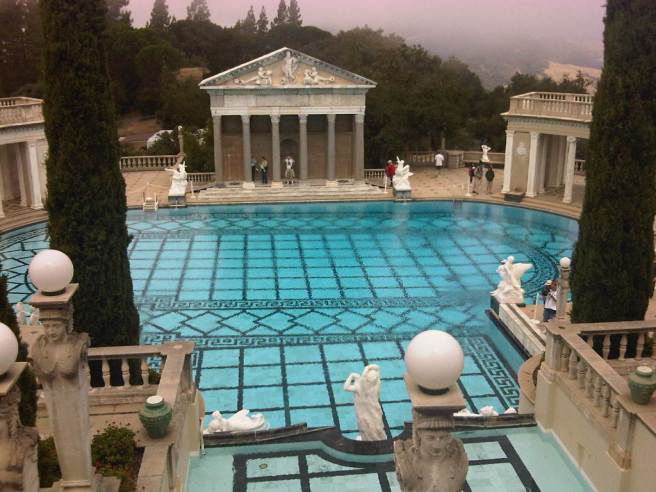 I decided to do a road trip to Southern California, yet with another friend from MBA. These lines are being written at Day’s Inn, San Simeon, at $160 a night, the most expensive motel I have ever stayed at. A small sacrifice I had to make in order to visit nearby Hearst Castle (yet another lesson for me to plan ahead.. NOT).

When we first pulled into the parking lot, the sight of the motel reminded me of a location of a horror movie or maybe a crime scene from CSI or maybe Kill Bill. However, we were pleasantly surprised when our room turned out to be quite spacious and clean (I even made sure to inspect the sheets having undergone a recent most traumatic hostel stay in Costa Rica). The shower curtain was even hung on one of those arched rods that one finds at legit establishments such as the Hilton. I was uber-impressed. Can’t wait to see the place at daylight. When I asked the lady at the reception whether the breakfast is served at the restaurant at the front, her response was: “THAT restaurant serves HOT breakfast, like omelets, pancakes, sausage. Your continental breakfast is served over there..”, she condescendingly pointed to the shady tiny room on the backside of the reception. Something to look forward to, eh?

I guess I should say a few words on the preceding events. We started the road trip with the 17 mile scenic drive at Carmel. It was really beautiful but can’t say that it was worth paying the $10 entry fee, unless one is into golf or really loves tailgating crazy amounts of tourists. I did get to see the most obese squirrel I have ever seen in my life (picture to be added later). He was hanging out with the seagulls like they are bff’s. Anyways, the best things in life are free as was proved by the incredibly beautiful drive along Highway 1 from Carmel to San Simeon. The views were so incredible that I imagined I was in Scotland and not USA…

Oh yes, almost forgot the tourist trap Yelp subjected us to in Monterey, CA. We were looking to get some local seafood in a relaxing atmosphere. Yelp recommended Sandbar & Grill restaurant at the municipal wharf, quoting it as one of the top rated place, frequented by locals. The place turned out to be shabby, highly overpriced and the only locals there were the ancient waitresses who looked like they were teleported there from a dinner in the 80’s. The best thing about our lunch was the incredible people-watching opportunity it provided. They were the top of the crop of mid-America and beyond. In the table across, was a lady wearing something resembling a leopard print tent, complemented by a bright red lipstick. In the back of the room, a F-O-B-ish looking immigrant family was chewing on their meal. There were the several larger-than-life families wining and dining. But the best, I saved for last: in the table behind us was a family that was sent to us directly from Jersey Shore. The wife had HUGE hair (Something between Liz Taylor later years, Elvis, and Fran Drescher’s mom from the show “The Nanny”), humongous breasts (is there such thing as triple-D?), fake nails with leopard design, and big sunglasses hiding her eyes. The husband was your average Joe mechanic / plumber/ truck driver look. Their kid (about 4 or 5 old), was a mutt of the two. He saw something in the water and started screaming “Dolphin, Dolphin” across the entire restaurant. Leopard tent lady corrected him and told everyone this was a seal and not a Dolphin. While his mother was apologizing to us “sorry, we are from out of town” (like it’s OK to scream across restaurants in other towns..), he kept screaming “Dolphin”. It took him a while to believe Leopard tent’s words, and then he switched to screaming “Seal, look it’s a seal”, to the joy and delight of the proud parents.

Time to go to bed, tomorrow we go to Hollywood! 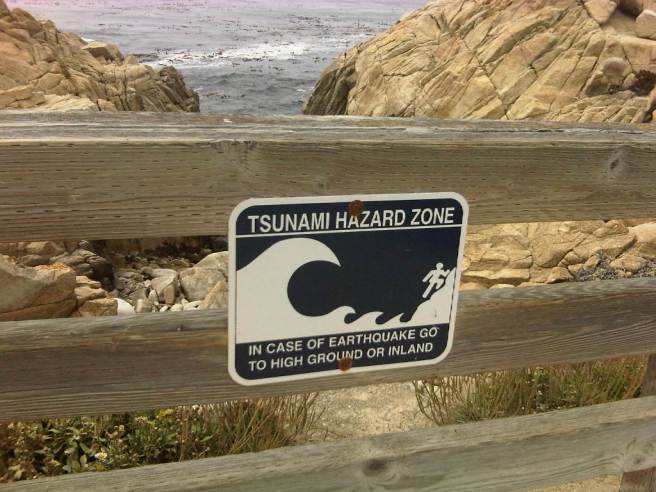 Just finished reading two yet amazing books by Haruki Murakami. After Dark and South of the Border, West of the Sun. I was reminded again that I could never be a really good writer. After Murakami’s penetrating insights into the human soul, David Sedaris’ observations that seemed witty at first,  sound like third rate cheesy mambo jambo (I read Me Talk Pretty One Day last week). It’s like having a McDonald’s burger followed by a fine steak.