Recently, I  have increasingly been getting questions about my future plans. My landlords wrote to ask if I am planning to stay in my apartment. My mother informed me of new companies moving to their town and offering good opportunities for me to consider. My grandfather was asking me what are my future goals – Do I want to stay a manager, do I want to become a CEO of a company? Do I want to have my own company? My little brother was expressing opinions about my marriage prospects and how he and EVERYONE are worried (?!?!!). And about hundred others asked how long do I intend to stay in Brazil and where will I move next?

The answer is that I have no idea. I have created a magical world around me in this crazy country. I have more than everything to be grateful for. I live in a place where winter does not exist. I have an excellent group of friends locally – they are funny, smart, fun, supportive, open-minded and loving (you know who you are).  I also have a spread out network of similar individuals who have been visiting me constantly and sharing their time with me.  I have been meeting a slew of interesting,weird, creative, different types of people that have exposed me to crazy and innovative ideas and experiences. I cannot sleep properly most of the time, nor sit quietly for more than 5 minutes, because my head is so full of ideas and I cannot make my mind stop running. I am always running somewhere and doing something. I have my sad moments and difficult times, but those never last very long because the next good thing happens, and there is no time to mop around. Finally, I already feel at home here. I speak the language and I get the culture, and how to navigate within the local chaos and irrationality.

Getting to this point has not been easy at all and required a lot of will power and effort. So when I have to think about leaving it all behind and starting all over again. Where would I even go? I just block this train of thought completely. Plus – how can I think about trading happiness for a promise of happiness? Now, that’s crazy.

Maybe it’s something related to the excellent points brought up in What Happens When You Live Abroad?

I have always been a direct person. This may not be surprising when looking at the bigger picture of my Russian- Israeli background and overall family upbringing. However, a person who doesn’t know me or the context of those cultures doesn’t have this big picture. Such is life.

It took me 10 years of living in the United States to learn the important skill of being tactful. I worked long and hard on it because I understood the following:  if you want to say something negative that will not add any value to the situation, what’s the point of saying it? It’s better to keep it to yourself.

Now I’m at the next level of my emotional development. I realized a few years ago that people don’t want to hear the truth, they just want to hear the answer they are expecting. A simple example is of a woman asking her boyfriend “Do I look fat?”, of course she expects “no, you look great!”. If he says this to her, everyone is happy. But, if he says no, she feels bad, he feels bad because she feels bad and overall happiness is diminished.

Similarly, in a country like Brazil, where the emotional realm is much stronger than the rational one, I find myself increasingly more in situations where a superior asks me for my opinion, but in fact, he or she just wants me to repeat his or her own opinion and show admiration to his or her ideas. And again, I reach this point where if I disagree, everyone’s happiness diminishes. I should just agree, nod, accept and move on. But, it’s just so hard to do.

First of all because at times, opinions and perceptions may have consequences for others, and agreeing means incriminating others while saving myself. So there is an issue of ethics and integrity.

Secondly, there is a more complex problem of the inherit bias we face as foreigners. Everyone passes on judgment on anything you do, attributing your actions and opinions to your country of origin. “Aha! – she doesn’t agree because she’s American, and Americans think differently than us.”  Brazilians tend to do this a lot. They attribute your opinions to you NOT being Brazilian and therefore, by default, disagreement is your fault, since you don’t understand the Brazilian context.  But in reality, the situation doesn’t have anything to do with the Brazilian or not Brazilian context. It’s easier for them to reject your opinion this way, instead of considering the option that you may be actually right and they are wrong. What can one do in such situation? Agree with their opinion, of course.  You know if you disagree they will think you’re being inflexible, arrogant, and overall questioning their position. Disagreeing will not lead anywhere.  In the end, everyone is happy, but you feel like you just lost a piece of yourself. Especially, since you know that you’re hired because and not despite being foreigner.

In short, this is the dilemma I am facing these days. How do I accommodate people’s emotional needs without losing my integrity or personality?

I have had quite a few people ask me before about how does one get a job in Brazil, how is the process like and how is it working/living in a country I had nothing to do with just one year ago. I still have that on my “to do” list as the answer is not simple or short. But in the meantime,  I found an interesting piece of the Four Stages of Living Abroad“: Honeymoon, Frustration/Rage, Understanding and Acclimation.

How was your process?

Here’s a graph I later found about this: 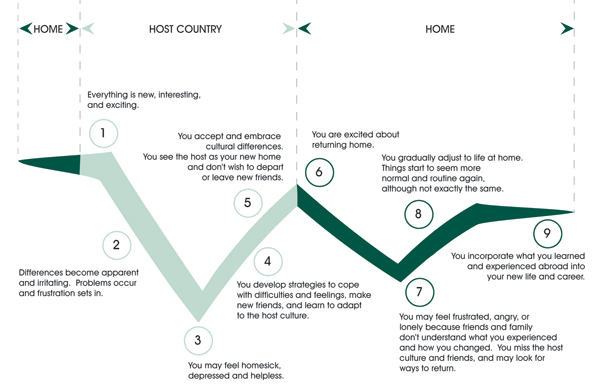